Back from being on hiatus for retooling, The Kung Fu Double Feature is back! And this time it’s out for REVENGE! Join us for not one, but TWO amazing films featuring high-flying Kung Fu action and the best in super-crazy, over-the-top stunts! Including a super secret second feature that must not be missed!

Master Of The Flying Guillotine

A blind assassin armed with a vicious flying guillotine is out to kill the legendary one-armed boxer (martial arts superstar Jimmy Wang Yu). Along the way, he interrupts a bizarre kung fu tournament and heads start to roll. It’s up to the one-armed boxer now, with his skull shattering punch and his ability to walk on walls. Eagle claw masters, a monkey style fight, and a Swami fighter with ten foot arms are just stepping stones to the massive showdown with the flying guillotine. This is an absolute classic, and truly must be seen to be believed. 35mm print! 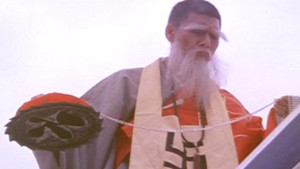 SECRET SCREENING! An extremely rare 35mm print of one of the greatest martial arts films ever made! Guaranteed to blow your mind and drop your jaw to the floor.