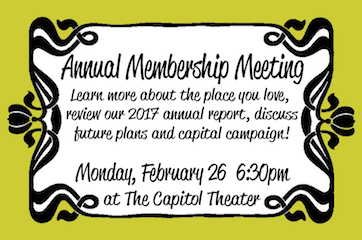 There are a lot of good reasons, especially our recent state Heritage grant award, for you to join us for our 2018 annual meeting at 6:30 PM, Monday, February 26, at the theater.

At a time when independent movie theaters in Seattle and elsewhere have been closing, the Capitol Theater is in its 94th year of continuous operation. And the Olympia Film Society staff, volunteers, and members like you can take full credit for keeping this landmark entertainment site open and operating for almost 40 of those years.

The past year has been an exciting one, with several sold out concerts, many important (but not terribly flashy) theater improvements, and an all female-directed film festival. But we also encountered a big challenge.

In mid-2017, OFS experienced a sharp drop in film revenue. Many contributing factors, such as digital streaming, lack of quality films available to single-screen theaters, and multiplex theater domination have added to significant drops in revenue nationwide. We need your ideas and support to sustain and grow OFS in this rapidly changing landscape.

For example, The Shape of Water, Three Billboards Outside Ebbing Missouri, Lady Bird, Get Out, I Tonya, Phantom Thread, and Mudbound was released in December. OFS will not be able to screen these films until March or later. When we do, the theater should see above average audiences, but nowhere near the attendance had we run them in January as many multi-screen theaters did. OFS is willing to take risks on cutting-edge films, but that means some films have to do exceptionally well to help us pay the bills.

To get first-run films sooner, we have to commit to showing the film more times than we currently do. We would likely have to show one film for at least two weeks. This form of film booking is quite a change from our current more scheduled approach. But our current path is not sustainable.

So, we are investigating many ways to give us more programming flexibility. For instance, a second screening room!

Having access to a second screen would allow OFS to expand film and event programming and put OFS in pole position for first-run films. But that would require a significant investment, currently estimated at about $150,000. The board and staff want to hear from you before we pursue this idea further.

Please join us for this discussion. We will also provide our 2017 annual report and we’ll go over what it means for our organization to receive a $118,000 state Heritage grant in terms of improvements to the theater and the role of a capital campaign to finally move us forward with heat, seats, more bathrooms, and other amenities to improve OFS theater-going experience.

We are looking forward to seeing you at the 2018 OFS Membership Meeting.