ALL FREAKIN’ NIGHT: THE BEYOND, Q: THE WINGED SERPENT, SHOCK WAVES, WHO CAN KILL A CHILD? and RE-ANIMATOR

All bags, back packs, carry on luggage will be subject to searches, best to leave your unmentionables at home.

All tickets and will call tickets will need to be exchanged for a numbered wrist band – which will also hold your place in line.

Online sales will end at 8:30pm day of show. – Tickets will be available at the box office at 10pm.

Wristbands will be available for will call/ticket exchange at 10pm day of show.

Italian director Lucio Fulci’s films are a surreal journey into a world of ultra gore, nightmare imagery, claustrophobic atmosphere, and over-the-top violence, all wrapped in a surreal soundtrack meant to drown us in a questionable reality. Though this doesn’t come close to describing the sheer craziness of The Beyond, thought to be Fulci’s disturbing masterpiece. In New Orleans, an old hotel with a storied past is inherited by a woman named Liza, who has plans to renovate. Little does she know that the hotel stands on one of the seven doors to Hell. When plans go forward and the door is disturbed, bizarre activity begins to plague the area. Slo-mo spiders, creepy little girls, rabid dogs, eye-popping deaths, and much, much more converge in a deluge of violent weirdness, as the vulnerable city becomes awash in the awakened curse meant to take it down forever.

Q: The Winged Serpent is a monster movie that takes place in New York City. What is that giant, bird-shaped shadow that sometimes covers the sun? Could it be the cause of the spontaneous beheadings plaguing the city? Or could it be the origin of the rash of rooftop abductions that have struck terror into oblivious NYC citizens? Official investigations have turned up nothing. Only when a screwed-up ex-con piano player runs from the law and straight into a giant, flying lizard’s rooftop nest is its actual existence proven. Q is a mythical Aztec monster brought to life to cause havoc in the stony city it now calls home—in the Chrysler building, nonetheless. When the ex-con decides to use his exclusive knowledge to blackmail the law, he may be smart, or he may be the monster’s next meal. Funny, scary, and really, really weird, Q: The Winged Serpent is a jaded and bloody exploitation classic full of deadpan humor and severed limbs.

In Shock Waves, Nazi super soldiers dwell on the ocean floor waiting to destroy humankind. When a charter boat picks up a distressed woman floating in the surf with a crazy story to tell about an island, there’s nothing else to do than investigate—especially after they run out of fuel off the island’s shore. Upon landing, they find a deserted hotel and a deluded German scientist, who tells of the Totenkorps: a sect of the Nazi SS created from the worst of society and trained to kill, kill, kill. But they couldn’t still be around… Or could they? The dim boat passengers are skeptical, until they’re being picked off one by one by pasty white, undead thugs in moldy goggles. They are super strong, crafty, and stealthy. Only one thing can stop them—and it’s not what you think. A classic in the Nazi zombie genre, Shock Waves will make you question history and the evil men are capable of.

Who Can Kill a Child?

Although mostly unheard-of, Who Can Kill a Child? is considered the very best Spanish horror film ever made. It takes place on an island—an island where kids kill. An English couple, looking for a secluded vacation spot, can’t resist returning to the majestic island of Almanzora. Conjuring pleasant memories, the couple arrives in a small boat and is left to fend for themselves. But where is everyone? There are only children by the beach and playing games in a courtyard. As the couple wanders further into the small village, no adults can be found—only the electric air of shocking anticipation. When an old man appears to give warning and succumbs to a gruesome fate, the couple realizes that they’re next—as the kids have taken their revenge, and all adults are now their prey. Probably the very best ‘killer kid’ movie ever, Who Can Kill a Child? is a wonderfully disturbing journey into the horrible.

Super gory, funny, crazy, and scary, director Stuart Gordon’s Re- Animator is arguably the very best H.P. Lovecraft adaptation put on film. Herbert West is a medical student with ambition. He spends his time at Arkham University studying the human body—and ways to defeat death. And he’s almost got it! Almost. When he ends up renting a room at a boarding house, Herbert finds the basement is the perfect spot to hone his new discovery—a glowing, green solution meant to inject life back into cadavers. And it almost works—almost. The only problem is that everyone he brings back to life ends up a raving, brainless fiend out for blood. But he’s working on it! He’s making progress. He’s dragged his unwitting roommate Dan into his scheme. As Herbert’s experiments become more elaborate, so does the trouble he gets into—because everyone knows: it’s impossible to cheat death—it will always catch up to the living eventually.

All Freakin’ Night is presented by… Darby’s Cafe! 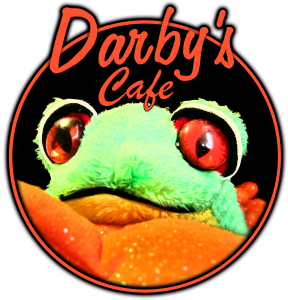