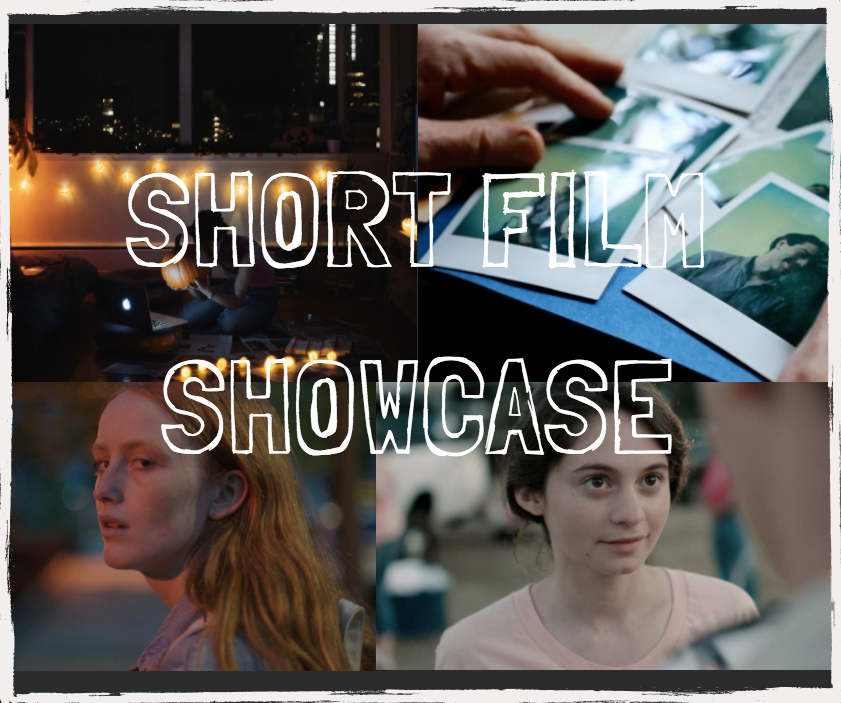 NORMAN NORMAN
A young woman grapples with the declining health of her beloved dog in this film about mortality, cloning, and Barbra Streisand.
Dir. Sophy Romvari / 2018 / US / 7 min

IT’S HIM
An unexpected encounter during an afternoon at the cinema catapults a young woman into a confrontation with her own grief, her parents’ pain, and the still raw wound of her missing older brother. Over a single afternoon and evening, Shelby must sift the ground of memory, heartbreak, and hope, ever in search of a way forward.
Dir. Sophy Romvari / 2017 / US / 12 min

PUMPKIN MOVIE
Two women carve pumpkins together over Skype as they discuss a years worth of negative interactions with men.
Dir. Sophy Romvari / 2017 / US / 10 min

QUEEN OF SWORDS
Queen of Swords weaves together a series of charged symbols and sounds to explore sexuality, boundaries, and vulnerability. At once playful and disquieting, this immersive piece pushes against binaries and linear articulation, employing varied strategies of touch and disclosure.
Dir. Emme Williamson / 2018 / US / 5 min

CHEER UP BABY
New York City present day. Anna is a 21-year old dance major in college. She takes the train home after a day of dance class and babysitting. She falls asleep on the train and wakes up to a man holding her hands. He whispers something to her she does not want to hear. The film follows Anna for the next two days. She tries to go about her life but grapples with the haunting memory of the stranger from the train. The city acts as the cacophonous landscape in which Anna develops a new perspective, one where she finds herself both suffocated and free.
Dir. Adinah Dancyger / 2017 / US / 12 min

SISTER JESUS
As an adult, Lucy recalls when she fainted in 2nd grade, and realized there was something special about Sister Pauline.
Dir. Wendy Jo Carlton / 2017 / US / 4 min

BURTON BEFORE AND AFTER
Fifteen years after Burton began his gender-affirming transition, his longtime friend Courtney calls him up with news that she has uncovered a cache of home video footage from that time period. Burton Before and After is an intimate portrait of transition, memory, and friendship.
Dir. Courtney Hermann / 2017 / US / 15 min

PLEASE STEP OUT OF THE FRAME.
Reminiscent of the work of Japanese mastermind Takashi Ito, Karissa Hahn’s Please step out of the frame. uses Super 8, a desk, and a laptop to create a playful choreography of body and screen.
Dir. Karissa Hahn / 2018 / US / 4 min

FRAGMENTS 83
Fragments 83 rediscovers—and repurposes—Richard Millen’s 1983 experimental film If You Can’t Be with the One You Love, shot in Brooklyn and the West Village in the early days of the AIDS epidemic. The resulting documentary explores the hunt for sex/love, the joy of making cinema, and the inexorable passage of time.
Dir. Richard Millen & Corentin Koskas / 2018 / US / 19 min

SLOW CITY
Slow City tells the stories of two young Korean musicians who perform every Friday in the basement of an empty jazz bar in Seoul’s upper class Gangnam district. The film offers a glimpse into both of their lives and how they have turned the obstacles that they have faced into a life dedicated spreading creativity.
Dir. Barensel Baş, Benjamin Liguori, Ceren Yüksel / 2018 / KOREA / 19 min

LAURA IN SEARCH OF TEETH
Laura L. Brown is a collector of oddities, Facebook entertainer and self-proclaimed Christian Hippie Freak living in McMinnville, Oregon. Her adult son and nephew are still getting used to it. An intimate look at life, death, trauma, and the wonders of formaldehyde. Note: Contains sexual content, mentions of sexual violence, and graphic footage of human organs
Dir. Megan Hattie Stahl / 2018 / US