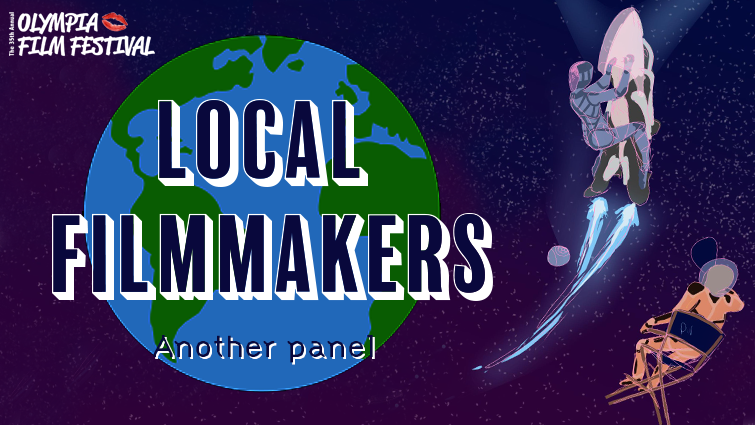 Itching to tell a story, but don’t know where the hell to start? Local filmmakers in the South Sound region share their trade secrets in this free panel hosted by Octapas Café. Discuss inspiration, finding the right screenwriting application, shooting with limited resources, editing on old laptops, and the worst of them all: self promotion. Moderated by local SAG actors and producer Jason Connelly, and featuring local filmmakers Rachel Millena Saul, Jonah Barrett, Emme Williamson, Cody Castillo, Sylas Dall, and Nat Murphy. Ask questions, engage, and network with some fellow filmmakers!

Jason Connelly
Jason Connelly is as Actor/Director/Producer born and raised in the Seattle community of Ballard. While attending Ballard High School, he was introduced to theatre and mentor Earl Kelly and knew acting and storytelling was for him. Jason has performed in various stage, commercial, TV, and film productions in the PNW. Currently, he is in post-production with the feature-length film “They Reach” www.theyreach.com. Jason studied at Cornish College of the Arts receiving his BFA in Acting.

Emme Williamson
Emme Williamson is an artist, writer, and tarot reader. Their work focuses on identity, personal narrative, and the body. Their research interests include spirituality, cultural trauma, and gender. Emme was born and raised in the Pacific Northwest and received their MFA from the University of Illinois at Chicago in 2018.

Rachel Millena Saul
Rachel Millena Saul is a filmmaker and actress from Olympia. Her directorial debut, the short film OT3, screened at the 2017 Olympia Film Festival. Her recent acting work includes area films Dusk To Dusk, The Fabricated Partner of Cody McGuire, and this year’s Booger. She lives in Olympia with her husband and daughter.

Jonah Barrett
Jonah Barrett is a multimedia artist from the forests of Tenino, Washington. He wishes he lived in a timeline where fantastical things existed, like magic and interstellar travel and universal healthcare. He usually makes things about monsters and gay stuff; sometimes gay monsters. Under the production name “Malicious Wallydrags” he’s been the writer and director of two feature films, four web series, a dozen-ish shorts, and a play or two. He likes helping his friends make things and always tries to work with the people he loves. Someday he will live on a farm with his vegan boyfriend—along with two dogs, two pigs, and a genetically engineered dinosaur.

Sylas Dall
Sylas Dall has directed 3 short films (the blue line) for Seattle’s 48 hour horror film fest & ( the hit squad) for the Seattle 48 hour film fest. His 3rd short was an idea/concept that ended up becoming a feature film (They Reach). Currently trudging through the edit of life, he has stumbled upon 2 cats (fluffy cats) 1 Fiance (beautiful) & 3 children = family. Not to mention a vigorous appetite for Sushi. He loves animals, the art of cinema magic & crushing nostalgic/ uplifting voyages through said cinema. Sylas hopes that he will soon someday hold a copy of his first feature film in his sushi covered fingers.

Cody Castillo
Cody Castillo is an 18 year old Olympia based videographer and aspiring filmmaker. He has produced, directed, shot, and written numerous films locally, most notably of which was the feature film “Boogiepop”. He is currently working on a Documentary about the homeless/houseless in Olympia.