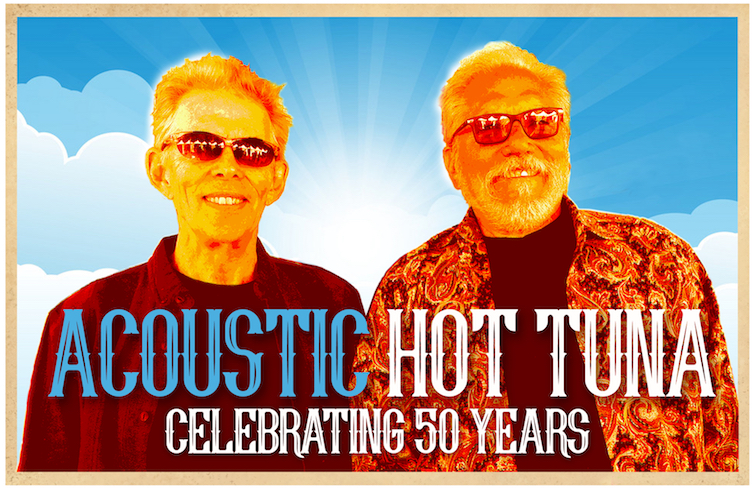 Ecstatic Productions will donate a portion of the night’s proceeds to Earthbound Productions, benefiting the Procession of the Species.

Begun as an acoustic spinoff of the Jefferson Airplane, Hot Tuna eventually became the full-time focus of founding members Jorma Kaukonen and Jack Casady. The name Hot Tuna invokes as many different moods and reactions as there are Hot Tuna fans — millions of them. To some, Hot Tuna is a reminder of some wild and happy times. To others, that name will forever be linked to their discovery of the power and depth of American blues and roots music. To newer fans, Hot Tuna is a tight, masterful duo that is on the cutting edge of great music. All of those things are correct, and more. For more than four decades, Hot Tuna has played, toured, and recorded some of the best and most memorable acoustic and electric music ever. And Hot Tuna is still going strong — some would say stronger than ever.

In a career that has already spanned a half-century, Jorma Kaukonen, founding lead guitar player of the Jefferson Airplane, has been the leading practitioner and teacher of fingerstyle guitar, one of the most highly respected interpreters of American roots music, blues, and Americana, and at the forefront of popular rock-and-roll.

Few musicians have the opportunity and skill to create an entire style of playing. Still, Jack Casady, founding bass player of the Jefferson Airplane, has done precisely that with the electric bass. With roots as a lead guitar player, Jack broadened the range and scope of the bass, taking it out of the rhythm category and bringing to it a world of intricate and complementary melodies.