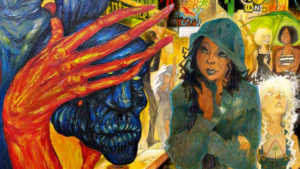 Courtesy of Three Magnets, the bar will be open in the mezzanine as well on Friday. Come hang out, have a drink, and digest some great visual and musical art!

POSTER SALE: OFS will also be having a huge film poster sale during ArtsWalk. Come down and grab some rad posters from your favorite films that we’ve screened.

MonkFlower is a neo-jazz, funk and hip hop trio with Matt Fearon on bass, Gabe Judd on guitar and Harrison Hannon on drums based in Olympia, WA.

Molten Salt is a psycho dreamy Olympia band formed in 2011. What started out as a solo project of singer/guitarist, Keir Allison-Bourne, slowly evolved over time into a full band of friends. In the band’s current form Mike Elliott is the percussionist, Laith Scherer plays bass, and John Winter plays guitar.

Cedar Sap is the amorphous and explorative musical project of singer-songwriter Sydney Blanchard. Rooted in nature and the spiritual, Blanchard’s honest lyricism is inspired by the changing landscape of a life of travel, and dreams, both waking and subconscious. February 19, 2018 met Cedar Sap’s newest release and debut full length, Crystal Visions (following 2016 EP Oh Sugar and 2017 Demo Tape). Crystal Visions, recorded at Slush Room Studios in Olympia and released on to limited edition tapes, offers a duality between the heavy: distorted layers of guitar found on the tracks Honeypot and River, and the soft: ethereal yet powerful vocals of Feather and Song for Sleeper.

Katherine Smith is a multimedia artist who specializes in acrylics on found mediums. Growing up with a scientist father and a spiritually religious mother, one could say they were born and raised in an environment of harmony among contrast. Inspired by the limitations of dualistic thought process and their own struggles with identifying the self, Katie uses their artwork to explore the collective id of society. They look up to surrealist artists such as H.R. Gieger and Yayoi Kusama. Smith’s goal is to communicate that which cannot be said, and the effect is an unsettling exploration of the monsters within us. You can find their art online here.

Jess Tanguay is a military brat from all over the American West. Since childhood he has been inspired by traditional animators (Richard Williams, Don Bluth) and comic artists to strive for motion and vitality in his drawings. His interest in 1980s MTV and classic sci-fi/fantasy art (Chris Foss, Wayne Barlowe) feeds a fascination with injecting surreal qualities into otherwise mundane real-life elements. A passion for storytelling weaves its way into his illustrations. Ink, marker and pencil are his current favorite mediums as he moves towards small-format comic narratives. Tanguay received his Bachelor of Arts from the University of Wyoming, where he specialized in painting–but also enjoyed life drawing, sculpture, printmaking, and plein air. You can find his art online here.