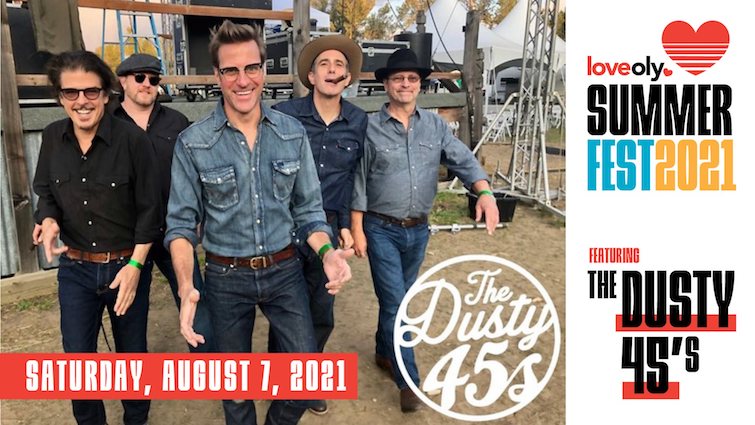 The Olympia Downtown Alliance is powering a street festival in historic Downtown Olympia that includes live music and performances, activities for kids and families, interactive art installations from local artists, local community groups, and a Biergarten featuring craft beer from 3 Magnets Brewing Co. and Well 80 Brewhouse. LoveOly Summer Fest 2021, presented by the City of Olympia, will take place every Saturday now through August 28, from noon to 6pm.

The Olympia Film Society (OFS) has partnered with the Downtown Alliance to produce the headline acts for the festival on the Main Stage in the Entertainment Area, sponsored by Olympia Federal Savings. The Dusty 45s will headline the Main Stage on Saturday, August 7 along with Red & Ruby.

The Dusty 45s have inspired and fired up crowds for over two decades to the delight of fans and critics alike. With their signature style and unique sound, the band is a consistently powerful and energetic player in the Americana field.

Led by charismatic singer/songwriter, guitarist and trumpeter, Billy Joe Huels, the raucous band tears through Huels’ original songs that draw inspiration from the roots of Rock, Rhythm and Blues, Honkytonk and Jazz. Current members of The Dusty 45s also include Jerry Battista(lead guitar), Rod Cook (Lead Guitar) Robin Cady (upright bass), and Kohen Burrill (drums). Huels and his outfit have steadily built their fan base since 1997. The Dusty 45s have toured extensively and they backed Rock and Roll hall of famer, Wanda Jackson multiple times. A highlight with Jackson was when they joined her opening for Adele’s “21” tour in 2011.

The Dusty 45s have released 7 recordings. The 2014 album, “Live and On Fire”, showcases the best of their bold and brassy sound recorded live in Seattle WA. Huels and the band are currently working on a new recording, due out in 2021.

Red & Ruby is jazz vocalist LaVon Hardison and swing guitarist Vince Brown, who team up on special occasions for a spirited romp through the roots of swing, jazz, and blues. Get ready for fun, upbeat, and up-tempo tunes that will make you feel good about yourself and help you see the world through rosier glasses.
Who: Brought to the community by the Olympia Downtown Alliance, produced by the Olympia Film Society, presented by the City of Olympia and the Entertainment Area is sponsored by Olympia Federal Savings