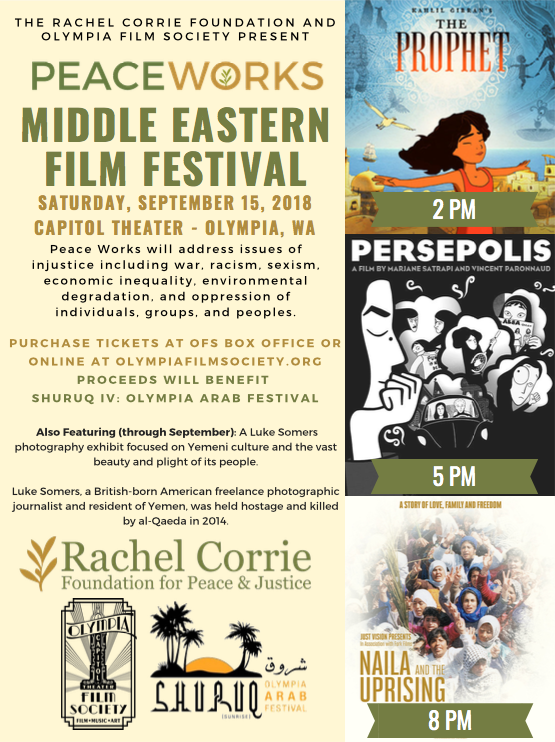 THE PROPHET
Doors 1:30PM / Show 2:00PM
The Prophet, by celebrated Lebanese author Kahlil Gibran, is among the most popular volumes of poetry ever written, selling over 100 million copies in forty languages since its publication in 1923. Gibran’s timeless verses have been given enchanting new form in this painterly cinematic adventure about freedom and the power of human expression. This breathtaking animated feature, produced and spearheaded by Salma Hayek, was an official selection at Cannes and made its North American premiere at Toronto International Film Festival. Written and directed by Roger Allers (The Lion King), the film intersperses Gibran’s elegant poetry within stunning animated sequences by a host of award-winning animators from around the world. Set in a Mediterranean sea-side village, Kamila (Salma Hayek) cleans house for exiled artist and poet Mustafa (Liam Neeson), but the more difficult job is keeping her free-spirited young daughter, Almitra, (Quvenzhané Wallis) out of trouble. The three embark on a journey meant to end with Mustafa’s return home – but first they must evade the authorities who fear that the truth in his words will incite rebellion. Featuring music from Damien Rice, Glen Hansard and Yo-Yo Ma.
Dir. Roger Allers / US / 85 min

PERSEPOLIS
Doors 4:30PM / Show 5:00PM
Persepolis is a 2007 adult animated biographical comedy-drama film based on Marjane Satrapi’s autobiographical graphic novel of the same name. The film was written and directed by Satrapi with Vincent Paronnaud. The story follows a young girl as she comes of age against the backdrop of the Iranian Revolution. The title is a reference to the historic city of Persepolis. An international co-production between companies in France and Iran, the film premiered at the 2007 Cannes Film Festival, where it co-won the Jury Prize. It was nominated for the Academy Award for Best Animated Feature.
Dir. Marjane Satrapi & Vincent Paronnaud / France & Iran / 96 min

NAILA & THE UPRISING
Doors 7:30PM / Film 8:00PM
When a nation-wide uprising breaks out in the Occupied Palestinian Territories, a young woman in Gaza must make a choice between love, family, and freedom. Undaunted, she embraces all three, joining a clandestine network of women in a movement that forces the world to recognize the Palestinian right to self-determination for the first time. Naila and the Uprising chronicles the remarkable journey of Naila Ayesh and a fierce community of women at the frontlines, whose stories weave through the most vibrant, nonviolent mobilization in Palestinian history – the First Intifada in the late 1980s.
Dir. Julia Bacha / US & Palestine / 86 min

Luke Somers’ photography to show in Olympia
The Rachel Corrie Foundation is honored to present the photography exhibit, “A Day in the Life of Yemen”, showcasing the work of the late photojournalist Luke Somers for the month of September 2018 at the Capitol Theater (206 5th Ave SE, Olympia, WA 98501) in partnership with the Olympia Film Society. The exhibit is open to ticket-holding guests of the theater.
In addition to the month-long display, Luke’s family members will be in attendance at the 2018 Peace Works: Middle Eastern Film Festival to meet community members and answer questions about Luke and his work, and will participate in a panel discussion and exhibition at Shuruq IV: Olympia Arab Festival on October 6, 2018 (Arab Festival is free to the public).
ABOUT LUKE SOMERS
Luke Somers, a British-born American freelance photographic journalist and resident of Yemen, was killed in a failed raid attempt in December 2014, one year and three months after his abduction by armed tribesmen. Luke arrived in Sana’a, Yemen in 2011 as an English teacher; and, although revered by his students and colleagues, Luke began to shift gears into photojournalism, bearing witness to the visceral realities – both bleak and inspiring – of the country, as well as the cultural phenomena of the Arab Spring as it swept through the region.
After Luke’s death, the state of Yemen has only become direr. Due to political corruption, the former and present administration’s use of drone strikes, as well as Saudi-led and U.S. backed sanctions, airstrikes, and bombings, Yemen has been reduced to a deplorable state, where malnutrition and youth mortality have skyrocketed. Luke knew, befriended and loved the very people who are now either gone or struggling for their survival. Through this exhibition, we will be providing a lens through Luke’s – and, in turn, our – eyes to the hospitality, generosity, beauty and sheer authenticity of the people of Yemen. In doing so, we hope to bridge the wide gap in understanding that defines our “us-and-them” mentality, as well as to provide a glimpse into a day in the life of a Yemeni citizen.
We invite you to participate in a journey of Luke’s powerful and transformative years in Yemen.
To learn more about Luke, please visit our website.