2016 Intro by SHEL from Tour Screeners on Vimeo.

Established in 1979, Mountainfilm is dedicated to educating, inspiring and motivating audiences about environments, cultures, issues and adventures. Working at the nexus of filmmaking and action, its flagship event is the renowned Telluride Mountain Film Festival, a four-day event held each Memorial Day weekend in Telluride, Colorado. The festival has attracted leading documentary filmmakers, artists, photographers, conservationists, mountaineers, scientists, journalists and explorers from around the world to engage in the festival’s tag line of “celebrating indomitable spirit.” Mountainfilm on Tour shares a selection of the films from the annual festival with audiences around the globe. 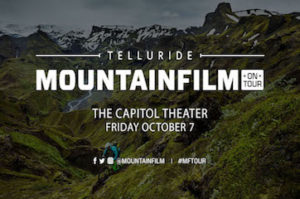