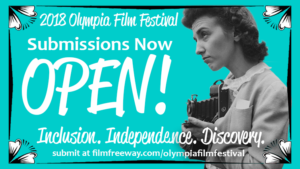 Inclusion. Independence. Discovery. The 35th Annual Olympia Film Festival is a celebration of curiosity, boundless creativity, and the importance of cinematic exploration. The Capitol Theater in Olympia, Washington has been screening dramatic narratives and documentary features since 1924, and our belief in arts, inclusivity, and emerging directors has been the staple of our programming.

Since 1983, the Olympia Film Society has hosted the annual Olympia Film Festival, a ten-day around-the-clock extravaganza of films, filmmakers and film-related guests, special performances, discussion panels, and educational workshops. The festival attracts between 5,000 and 7,000 attendees each year.

The festival is well known and respected throughout the film world and is hosted around the Olympia, Washington downtown area, mainly inside the Capitol Theater, a 1924 concert and movie palace owned and operated by the Olympia Film Society. This organization supports a small staff and board of directors along with over 125 dedicated volunteers who select films, organize events, and run the Capitol Theater.

If your submission is accepted, filmmaker(s) must be prepared to send a DCP of their feature or short to the Olympia Film Society for screening purposes.

Submission and festival information can be accessed beginning March 1.